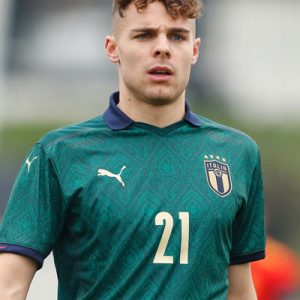 Edoardo Vergani (born 6 February 2001) is an Italian football player. He plays for Bologna on loan from Inter Milan.

Club career
He joined the youth teams of Inter Milan at the age of 13 and represented the club in the 2018–19 and 2019–20 editions of the UEFA Youth League. He made his debut for Inter’s senior squad in July 2019, in a friendly. He was first called up to Inter’s senior squad for a competitive game in November 2019 for a game against Verona, but remained on the bench.

On 17 September 2020, he was loaned to Bologna for a season, with an option to purchase.

He made his Serie A debut for Bologna on 5 December 2020 in a game against the club holding his rights, Inter. He substituted Rodrigo Palacio in the 79th minute as Bologna lost 1–3 away.

International career
He was first called up to represent Italy for the Under-15 squad in 2016.

At the 2018 UEFA European Under-17 Championship, he scored 4 goals, including winning goals in the quarter-final and semi-final, as Italy finished as runners-up to Netherlands.