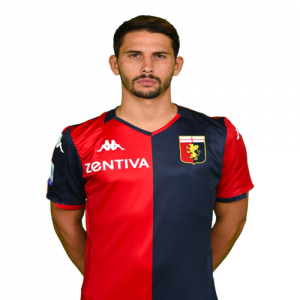 Edoardo Goldaniga (born 2 November 1993) is an Italian professional footballer who plays a defender for Serie A club Genoa, on loan from Sassuolo.

Pizzighettone & Palermo
Born in Milan, Goldaniga began his career when he was signed by Pizzighettone as a youth. He made his senior debut for the club in a Serie D league match in 2010. After eventually racking up more than 60 appearances for the club, he was subsequently noted by scouts from Serie A club Palermo, who agreed to sign him in July 2012. Initially joining the first team’s pre-season camp, Goldaniga was then included into the Primavera under-20 squad, where he spent the 2012–13 season.

Pisa (loan), Juventus & Perugia (loan)
In July 2013 he was loaned out to Lega Pro Prima Divisione club Pisa in order to gain regular first team experience. His impressive performances in the first half of the 2013–14 season won him interest from defending Serie A champions Juventus, who acquired 50% of the player’s transfer rights in January 2014 on a co-ownership basis from Palermo (in a cashless swap with Eric Lanini). He remained with Pisa for the entirety of the 2013–14 Lega Pro Prima Divisione helping the team to a 6th-place finish in Group B and a spot in promotion play-off. Goldaniga featured in all 33 matches for the club as a starter, scoring two goals, although Pisa eventually lost out in their hopes for promotion following a 2–1 aggregate defeat to Frosinone in the semi-finals. Upon the conclusion of the loan agreement, Goldaniga returned to Juventus on 30 June 2014, after the club renewal of the co-ownership agreement.

After officially joining Juventus for the first time on 1 July 2014, Goldaniga was instantaneously sent out on a season-long loan deal to newly promoted Serie B side Perugia, who were promoted from the Lega Pro Prima Divisione as Group B champions.

Return to Palermo
After a great season in Serie B, Goldaniga re-joined Palermo who announced they had resolved co-ownership of the player with Juventus.

Sassuolo
He, along with Palermo goalkeeper Leonardo Marson, signed for Sassuolo on 29 July 2017.

Loan to Genoa
On 2 September 2019, he joined Genoa on a season-long loan with option to buy. On 16 September 2020, the loan was renewed for an additional season.