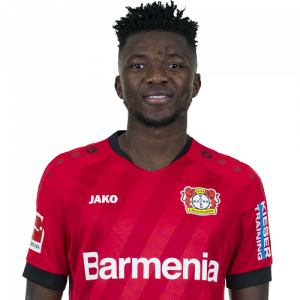 Edmond Fayçal Tapsoba (born 2 February 1999) is a Burkinabé professional footballer who plays as a centre-back for German club Bayer Leverkusen and the Burkina Faso national team.

Early and personal life
Tapsoba grew up in the Karpala section of Ouagadougou where he played football in the streets, but he never played organized football until the age of fourteen. As a child, he would often skip school to play football. He is represented by former Portugal international Deco. Tapsoba can speak some English, as well as French. During the COVID-19 pandemic, Tapsoba donated masks, gloves, and hand sanitiser to a market in Ouagadougou.

On 31 January 2020, he agreed to a five-and-a-half-year contract with Bayer Leverkusen for a fee of €18 million + €7 million for objectives. On 21 February 2021, he scored his first Bundesliga goal for Bayer Leverkusen in the final seconds of extra time in a match against FC Augsburg, ending 1-1 and extending Leverkusen’s unbeaten streak against Augsburg to 20 matches.