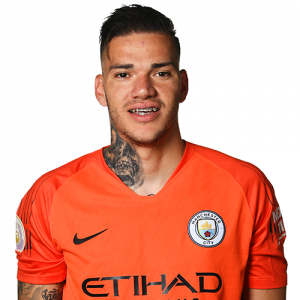 Ederson Santana de Moraes (born 17 August 1993), widely known as simply Ederson is a Brazilian professional footballer who plays as a goalkeeper for Premier League club Manchester City and the Brazil national team. He is considered the world’s most expensive goalkeeper from a transfer value perspective by the CIES. Ederson has been praised extensively by the media for his composure on the ball in high risk situations, ability to rush off his line and anticipate opponents who have beaten the offside trap,and remarkable ability to pick out accurate long balls to play through teammates.

He started his career at São Paulo in 2008 before joining Portuguese side Benfica one year later, where he would spend two seasons. In 2012, he transferred from Ribeirão to Primeira Liga side Rio Ave and became a regular starter there. He rejoined Benfica in 2015 and was assigned to the reserves before debuting for the first team, with whom he would win four major titles in two seasons.

For the 2017–18 season, Ederson joined English club Manchester City for £35 million and became the most expensive goalkeeper of all-time in terms of the nominal value of pound sterling at the time of his transfer. He went on to win the Premier League and EFL Cup in his first season in England, and won a domestic treble the following season.

Ederson made his senior debut for Brazil in 2017 after previously being capped at under-23 level. He was chosen in Brazil’s squad for the 2018 World Cup and the 2019 Copa América, winning the latter tournament.