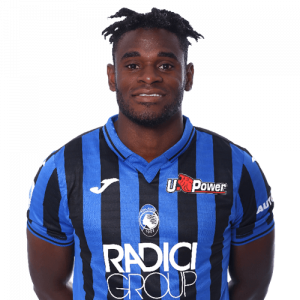 Duván Esteban Zapata Banguero is a professional footballer who plays as a striker for Italian club Atalanta and the Colombia national team.

After starting his career with Colombian club América de Cali, he later played for Estudiantes in Argentina. From 2013, he played in Italy’s Serie A, for Napoli, Udinese, Sampdoria, and Atalanta.

At international level, Zapata made his senior debut for Colombia in 2017, and took part at the 2019 Copa América.

On 17 January 2020, Atalanta exercised their option to purchase Zapata’s rights on a permanent basis. A week later, he scored his first goal since his return from a three-month injury in a 7–0 defeat of Torino. On 12 July, Zapata scored his 15th goal of the season in a 2–2 draw against Juventus, making it the first time since Juventus in 1952 that a Serie A club had three players with 15 or more goals in a season (Muriel, Iličić, Zapata). On 27 October 2020, he scored a brace in a 2–2 draw against Ajax in the 2020–21 UEFA Champions League.