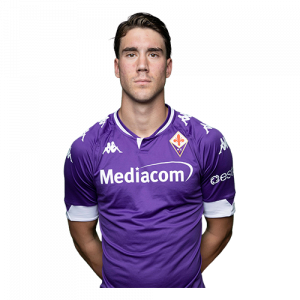 Dušan Vlahović (born 28 January 2000) is a Serbian professional footballer who plays as a striker for Serie A club Fiorentina and the Serbia national team.

In June 2017, Vlahović signed a five-year preliminary contract with Fiorentina, which became official on his 18th birthday, 28 January 2018. Vlahović was officially bought by Fiorentina on 22 February 2018, choosing to wear number 18 jersey. Due to the administrative norms, he was not available to play until 1 July 2018.