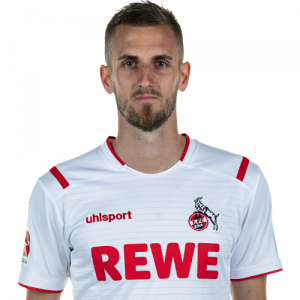 Dominick Drexler (born 26 May 1990) is a German footballer who plays as an attacking midfielder for 1. FC Köln.

Drexler played as a teenager for Bonner SC, Alemannia Aachen, and Bayer Leverkusen before joining Rot-Weiß Erfurt in 2010. He made his debut for the club in September of that year, as a substitute for Tino Semmer in a Thuringia derby against Carl Zeiss Jena which Erfurt won 2–1. He finished the 2010–11 season with four goals in 19 appearances.He scored eight goals in 34 appearances in the 2011–12 season and four goals in 28 appearances in the 2012–13 season.

Drexler signed with Midtjylland for the 2018–19 season. The transfer fee paid to Holstein Kiel was reported to be €2.5 million. However, during the same summer he was transferred again to 2. Bundesliga side 1. FC Köln for a reported fee of €4.5 million.