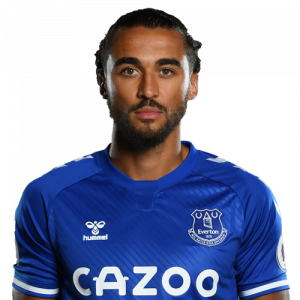 Dominic Nathaniel Calvert-Lewin (born 16 March 1997) is an English professional footballer who plays as a striker for Premier League club Everton and the England national team.

Calvert-Lewin began his career at local team Sheffield United, making his senior debut on loan at Conference North team Stalybridge Celtic in December 2014. He spent the first half of the 2015–16 season on loan at Northampton Town in League Two, and in August 2016 he joined Everton for a fee of £1.5 million.

Calvert-Lewin signed for Everton in a £1.5 million deal on 31 August 2016. He later reflected on the move as “simply too good to resist.” He made his debut as a substitute in a 2–1 win over Arsenal on 13 December 2016. After missing out for two months due to ankle injury, Calvert-Lewin scored his first goal for Everton in a Premier League fixture against Hull City on 18 March 2017, a 4–0 win. On 3 May 2017, he signed a five-year contract, keeping him until 2022. At the end of the 2016–17 season, he finished his first season, making 11 appearances and scoring once in all competitions.

Following his World Cup performance, BBC Sport expected Calvert-Lewin to make a first team breakthrough ahead of the 2017–18 season. Calvert-Lewin scored the winner for Everton in their Europa League third qualifying round second leg against Slovakian side MFK Ružomberok on 3 August 2017. He scored his first brace for the club in the third round of the EFL Cup against Sunderland on 20 September, ending a run of three games in which Everton did not score. Calvert-Lewin signed a new contract with Everton on 14 December, along with fellow youngsters Jonjoe Kenny and Mason Holgate, keeping him at Goodison Park until June 2023.

On 24 September 2019, in his 100th Everton match, Calvert-Lewin scored both goals of a win at Sheffield Wednesday – rivals of his first club Sheffield United – in the third round of the EFL Cup. The following 6 March with his contract due to expire, and while on 15 goals from 31 games for the season, he signed a new deal to last until June 2025.

On 13 September 2020, he started the 2020–21 season by scoring the winning goal with a header in a 1–0 win over Tottenham Hotspur, followed by his first Premier League hat-trick in a 5–2 victory over West Bromwich Albion. On 30 September, he scored a hat-trick in a 4–1 win against West Ham United in the EFL Cup. That made Calvert-Lewin the first Everton player to score two hat-tricks in one month since Dixie Dean in November 1931. Calvert-Lewin scored in the fourth succession in the Premier League with a towering header against Brighton & Hove Albion in a 4–2 victory at Goodison Park on 3 October 2020. He was named as the Premier League Player of the Month for September 2020 after scoring five league goals that month. Calvert-Lewin scored in the fifth succession in the Premier League with another header against Liverpool in a 2–2 draw at Goodison Park on 17 October 2020. Calvert-Lewin scored another brace, including his ninth and 10th league goal of the season, in a 3–2 away win against Fulham on 22 November 2020.