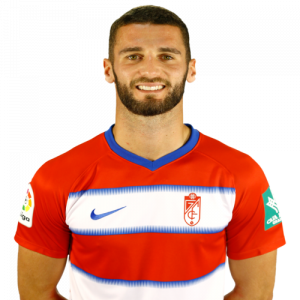 Sporting
Born in Cascais, Lisbon District, Duarte joined Sporting CP’s youth academy at the age of 16. He spent two full seasons with their reserves in the Segunda Liga to kickstart his senior career, his first match in the competition occurring on 5 October 2014 when he played 90 minutes in the 2–1 home win against C.D. Trofense.

Duarte served loan spells from 2016 to 2018, respectively at C.F. Os Belenenses and G.D. Chaves and with both clubs competing in the Primeira Liga. He made his league debut on 14 August 2016 while at the service of the former in a 0–2 away loss to Vitória de Setúbal, and scored his first goal on 1 October of the same year in a 1–3 away defeat to precisely Chaves.

On 3 August 2018, still owned by Sporting, Duarte signed with Deportivo de La Coruña with an option to buy. He scored in his very first appearance in the Spanish Segunda División, helping the visitors earn a point at Albacete Balompié after the 1–1 draw.

Granada
On 14 July 2019, Duarte joined freshly promoted Granada CF on a four-year deal for a €3 million fee, with Sporting keeping 25% of future sale rights. He made his La Liga debut on 17 August, playing the entire 4–4 away draw against Villarreal CF, and scored his first goal on 5 October in a 4–2 loss at Real Madrid.