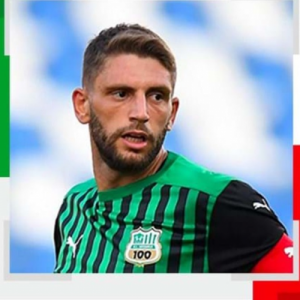 Domenico Berardi (born 1 August 1994) is an Italian professional footballer who plays as a winger and forward for Sassuolo and the Italy national team.

He began his club career with Sassuolo in 2012, helping the team win the Serie B title and earn promotion to Serie A in his debut season, later also being named the best player of the competition. His prolific performances in Serie A saw him emerge as one of Italy’s most promising young footballers, and earned him the Bravo Award in 2015. He is currently Sassuolo’s all-time record goal-scorer with over 100 goals.

On 17 April 2021, Berardi scored twice as Sassuolo came from behind to beat Fiorentina by a score of 3–1. This meant that Berardi had reached 100 goals in all competitions for the Neroverdi, since debuting for the club in the Serie B in August 2012. On 23 May 2021, Berardi scored his 17th goal of the 2020–21 Serie A season in a 2–0 win over Lazio. It was Berardi’s best goal-scoring season in his professional career and helped Sassuolo to an 8th place finish, missing out on European competition on goal difference.