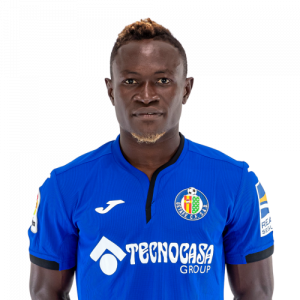 Dakonam Ortega Djené (born 31 December 1991), simply known as Djené, is a Togolese professional footballer who plays for Spanish club Getafe CF, whom he captains, and the Togo national team.

Mainly a centre-back, he can also play as a right-back.

Born in Dapaong, Djené moved to Benin in 2009, after graduating from Étoile Filante du Togo’s youth setup, joining Tonnerre d’Abomey. In 2011, he moved to Coton Sport in Cameroonian Elite One, appearing regularly afterwards.

Djené was named in the Coton Sport’s squad for the 2012 CAF Champions League campaign. On November 2013, he went on a trial at Ligue 2 side RC Lens, only returning to his parent club six months later.

In August 2014, Djené went on a trial at Spanish Segunda División side AD Alcorcón, joining the club permanently on 25 October. He made his debut on the following day, starting in a 1–3 home loss against Real Zaragoza.

On 23 March 2015, after already being a regular starter for the Madrid side, Djené renewed his contract until 2018. On 9 May, he scored his first professional goal, netting the game’s only in an away success at CE Sabadell FC.

On 1 July 2016, Djené was transferred to Belgian First Division A club Sint-Truidense. On 24 July of the following year, he returned to Spain, after agreeing to a four-year deal with La Liga side Getafe CF.

Djené’s debut in the top division of Spanish football came on 20 August 2017, starting in a 0–0 away draw against Athletic Bilbao. He scored his first goal in the category on 17 March, netting the equalizer in a 2–1 away defeat of Real Sociedad.