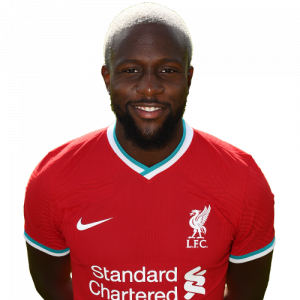 Divock Okoth Origi (born 18 April 1995) is a Belgian professional footballer who plays as a forward for Premier League club Liverpool and the Belgium national team.

Origi began his career at Lille, and scored on his professional debut for them in 2013. A year and a half later, he was signed for £10 million by Liverpool, who loaned him back to Lille for the 2014–15 Ligue 1 season.

After struggling at Liverpool due to injuries, and spending a year on loan at VfL Wolfsburg, Origi made a crucial contribution to the club during the 2018–19 season. After scoring the winning goal of the Merseyside derby at Anfield in the sixth minute of injury time, Origi scored twice against Barcelona in the Champions League semi-final second leg comeback to send Liverpool through 4–3 on aggregate, before scoring the second goal against Tottenham Hotspur in the 2019 UEFA Champions League Final as Liverpool won 2–0. He was a part of the squad that won the 2019–20 Premier League the following season, Liverpool’s first league title for 30 years.

Origi made his international debut for Belgium in 2014, and was part of their team which reached the quarter-finals of the 2014 FIFA World Cup, during which he became the youngest goalscorer in Belgian World Cup history.