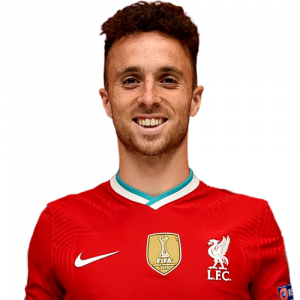 Diogo José Teixeira da Silva (born 4 December 1996), known as Diogo Jota, is a Portuguese professional footballer who plays as a forward and midfielder for Premier League club Liverpool and the Portugal national team.

He started playing with Paços de Ferreira, before signing for La Liga club Atlético Madrid in 2016. After two seasons in the Primeira Liga, he was consecutively loaned to Primeira Liga club FC Porto in 2016 and English EFL Championship club Wolverhampton Wanderers in 2017. Jota helped Wolves gain promotion to the Premier League for the first time since 2012. He subsequently joined the club in July 2018 on a permanent deal for a reported €14 million and went on to make over 100 appearances for them. In September 2020, Jota signed for Liverpool for a fee reported to be €50 million (£41 million).

Jota is a former Portugal youth international, representing his country at under-19, under-21 and under-23 levels. He made the squad for the 2019 UEFA Nations League Finals, which Portugal won, and made his senior international debut in November 2019.