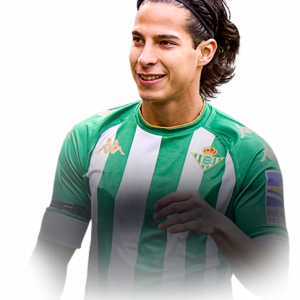 Diego Lainez Leyva (born 9 June 2000) is a Mexican professional footballer who plays as a winger for La Liga club Real Betis and the Mexico national team.

Real Betis
On 10 January 2019, Lainez joined La Liga club Real Betis on a five-year contract reportedly worth $14 million. The move made him the youngest player to emigrate from the Liga MX, as well as the second most expensive transfer paid for a Mexican player by a European club. He was handed the squad number 22. He made his debut in La Liga on 20 January in a 3–2 home victory over Girona, making his appearance as a 81st minute substitute. The following week, Lainez earned a starting berth and played 75 minutes in Real’s 1–0 defeat to Athletic de Bilbao. On 14 February, he became the youngest Mexican player to score in the UEFA Europa League when he netted an injury-time equalizer in a 3–3 draw with Rennes in the first leg of the round of 32.

On 19 December, Lainez scored his second competitive goal for Betis – a free kick – in the 4–0 victory over Antoniano in the first round of the Copa del Rey.