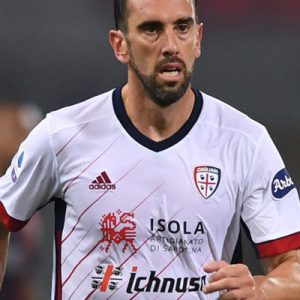 Diego Roberto Godín Leal (born 16 February 1986) is a Uruguayan professional footballer who plays as a centre back for Italian club Cagliari and the Uruguay national team.

Commonly cited as one of the best defenders in the world, he started his professional career with Cerro and three years later was transferred to Primera División side Nacional. He since spent most of his professional career in Spain, representing Villarreal and Atlético Madrid and winning eight titles with the latter club, including the La Liga title in the 2013–14 season.

A Uruguay international since 2005, Godín appeared for the country at three World Cups and five Copa América tournaments, winning the 2011 edition of the latter competition.

On 24 September 2020, Godín joined Cagliari on a three-year contract. He played his first match for them on 4 October, in a 5–2 away defeat against Atalanta B.C. where he also scored.