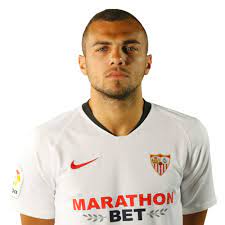 Diego Carlos Santos Silva (born 15 March 1993), or simply Diego Carlos, is a Brazilian professional who plays as a defender for Spanish club Sevilla.

Diego spent the latter portion of the 2013–14 season out on loan at Paulista.

Diego also spent about a month out on loan at Madureira

Estoril and Porto loan
On 2 July 2014, Diego was sold to Estoril.

In September 2014, Diego was loaned to FC Porto, appearing only for the reserves team.

Nantes
In June 2016, it was announced Diego Carlos would join FC Nantes on a five-year contract. The transfer fee paid to Estoril was estimated at €2 million.

On 14 January 2018, during a Ligue 1 match between Nantes and Paris Saint-Germain, referee Tony Chapron appeared to kick Diego following a collision, before sending him off for a second bookable offence. Chapron, who was suspended by the French Football Federation, admitted his mistake and asked for Diego Carlos’ second yellow card to be rescinded. As a result, French football league withdrew the second yellow card.

Sevilla
On 31 May 2019, Spanish club Sevilla FC announced they had reached an agreement with Nantes for the transfer of Diego Carlos.

Diego Carlos was part of the club’s successful 2019–20 UEFA Europa League campaign. In the run up to the final, he conceded penalties in both of Sevilla’s quarter-final and semi-final matches against Wolves and Manchester United respectively and then also gave away a penalty early on in the final itself against Inter Milan on 21 August 2020. He had a hand in the game-winning goal as his overhead kick was turned into the net by Romelu Lukaku.