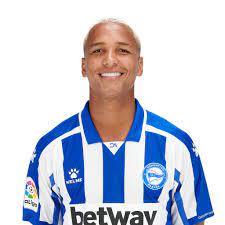 Deyverson Brum Silva Acosta (born 8 May 1991), simply known as Deyverson, is a Brazilian professional footballer who plays as a forward for Palmeiras.

Born in Santa Margarida, a neighborhood in Rio de Janeiro, Deyverson began his career with lowly local side Grêmio Mangaratibense in 2011. Known as Acosta at the time, he made his senior debut on 10 March 2011, starting and scoring the opener in a 2–0 Campeonato Carioca Série C home win against Duquecaxiense.
Benfica
On 5 September 2012, after a trial period, Deyverson joined Benfica on a three-year deal. He was placed on the reserve side and made his debut on 19 September 2012, against Tondela.
Belenenses
On 6 August 2013, Deyverson joined Belenenses, signing a four-year deal. After settling as the main striker in 2014–15, he scored the only goal in a 1–1 draw at Alvalade.
Levante
On 27 July 2015, Deyverson signed a four-year deal with La Liga side Levante UD, for a rumoured €2 million fee. He made his debut in the category on 23 August, starting in a 1–2 home loss against Celta de Vigo.
Palmeiras
On 11 July 2017 Deyverson returned to his homeland, after agreeing to a five-year contract with Palmeiras. He helped the club lift the 2018 Campeonato Brasileiro Série A by scoring nine goals, but subsequently fell down the pecking order after the arrival of Luiz Adriano.

On 21 January 2020, Deyverson returned to Spain after agreeing to a loan deal with Getafe CF in the first division for the remainder of the campaign. On 23 August, he returned to Alavés also in a temporary deal.