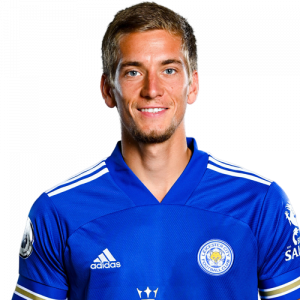 Dennis Praet (born 14 May 1994) is a Belgian professional footballer who plays as a Central midfielder for Premier League club Leicester City and the Belgium national team.

Youth at Genk
Praet joined the Genk youth academy in 2003 at the age of 8. He went on to spend most of his youth career at Genk, where he quickly made an impression and played for the club’s youth teams until 2010. He was part of a strong generation at the club and scouts considered him one of the top talents. He became part of Belgium’s youth teams and attracted the interest of clubs like Arsenal, Barcelona, Ajax and Lille.

Praet playing for Anderlecht in 2014
In May 2010 Praet transferred from Genk to Anderlecht turning down more lucrative offers. At Anderlecht he started out with the under-19 team, continuing to impress. In 2011, he received the prize for best player during the AEGON Future Cup in Amsterdam, a youth tournament in which teams like Ajax and Bayern Munich also competed.

Praet debuted in Anderlecht’s first team on 21 September 2011 starting in the Belgian Cup against Lommel United and provided two assists in a 4–0 win. In the next round of the cup he scored his first official goal for Anderlecht, against Rupel Boom FC. Not long after, on 30 October, he also made his debut in the Belgian Pro League as a substitute for Fernando Canesin while playing against Lierse SK. In March 2012, Praet signed a new contract until 2015.

During the 2012–13 season, Praet played regularly for Anderlecht as the club won their second straight league title. A two-year contract extension was agreed in early 2014 to take him through to the summer of 2017. He scored the third goal in Anderlecht’s 3–1 Jupiler Pro League play-off win over Lokeren on 25 May 2014 to seal Anderlecht’s 33rd league title, and their third in a row.

Praet made his 100th competitive appearance for the club in the league match at Club Brugge on 31 August 2014.[12] On 16 September, he scored away to Galatasaray in the UEFA Champions League group stage to put Anderlecht in front, but the Turkish club equalised in added time. His first league goal of the 2014–15 season came in the 2–2 draw at home to Club Brugge when he scored Anderlecht’s opening goal to equalise midway through the first-half. Like his strike against Galatasaray in the Champions League, it went in off the post. He scored in four consecutive games for Anderlecht between 14 and 26 December 2014, with the league wins over KV Oostende, Waasland Beveren and KVC Westerlo and the Belgian Cup win against SV Zulte Waregem.

This rich of form at the end of the year was rewarded at a ceremony on 14 January 2015 where Praet won the 2014 Belgian Golden Shoe, the annual award given to the best player in the Jupiler Pro League for the previous calendar year. He polled five points (250) ahead of Víctor Vázquez of Club Brugge (245).

Sampdoria
On 24 August 2016, Praet’s move to Sampdoria was finalised. Sampdoria paid a transfer fee of €10 million. After being heavily linked with a move to reigning Serie A champions Juventus during the 2018 summer transfer window, in November 2018, Praet signed a contract extension with Sampdoria, extending his stay at the club until 2021.

Praet was an ever present in the Sampdoria side during his three year spell, appearing in 98 Serie A games and scoring 4 goals, as the club finished in the top half of the table all three seasons.

Leicester City
On 8 August 2019, Praet signed for Premier League club Leicester City on a five-year contract, for a reported fee of €20 million. On 18 August 2019, he made his league debut as a 73rd-minute substitute in a 1–1 draw against Chelsea. On 11 January 2020, Praet scored his first goal for Leicester City in 1–2 defeat against Southampton. On 20 September 2020, he scored his second goal in a 4–2 win over Burnley.