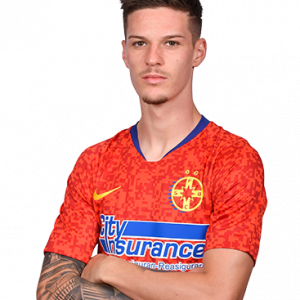 Dennis Man (born 26 August 1998) is a Romanian professional footballer who plays mainly as a winger for Serie A club Parma and the Romania national team.

He is considered to be one of the best forwards in his country.

Man began his senior career in the second division with UTA Arad in 2015, and one year later signed for FCSB. He became an undisputed starter at the capital-based club, being named to the Liga I Team of the Year in the 2018–19 season and winning a Cupa României final in 2020.

For his performances during the latter year, Man was awarded the Romanian Footballer of the Year trophy by the Gazeta Sporturilor newspaper, aged 22. At short notice, in January 2021, he joined Parma for a transfer fee which made him the most expensive sale of the Romanian championship.

Internationally, Man made his senior debut for Romania in March 2018 after previously being capped at under-19 and under-21 levels.

A substitute in his first five matches in Italy, Man was handed his first start by manager Roberto D’Aversa in a 2–1 home defeat to Inter Milan, on 4 March; He could not however complete the full game, being injured by Alessandro Bastoni in the 27th minute and replaced by compatriot Valentin Mihăilă at the half-time break. Two fixtures later on 14 March, he assisted the latter’s opening goal in an eventual 2–0 victory over Roma. On 3 April, Man scored his first Serie A goal in a 2–2 away draw with Benevento.