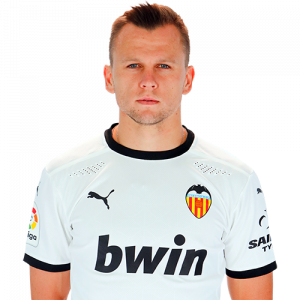 Denis Dmitriyevich Cheryshev (born 26 December 1990) is a Russian professional footballer who plays as a left winger for Spanish club Valencia CF and the Russian national team.

A youth product of Real Madrid, he made his senior debut for the reserves in 2009 and with the first team in 2012. He then had loan spells at Sevilla, Villarreal and Valencia before joining Villarreal permanently in 2016, and returned to Valencia on loan two years later.

Having earned 45 caps and scored 23 goals in its youth categories, Cheryshev made his debut for Russia in 2012. He was a participant at the 2018 World Cup, scoring four goals as the team reached the quarter-finals, and Euro 2020.

Valencia
Cheryshev joined Valencia permanently on 29 June 2019, for a fee of €6 million.