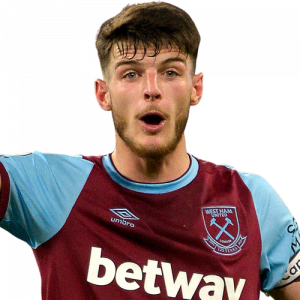 Declan Rice (born 14 January 1999) is an English professional footballer who plays as a defensive midfielder or centre-back for Premier League club West Ham United and the England national team.

On 16 December 2015, just over a year after joining West Ham United at youth level, Rice signed his first professional contract with the club. Rice received his first call-up to the West Ham senior squad for the games against Sunderland and Everton in April 2017, after impressing in the under-23 team. He made his senior debut against Burnley on the last day of the 2016–17 Premier League season, coming on as a 91st-minute substitute for Edimilson Fernandes in a 2–1 away win, five days after captaining the under-23’s to promotion with a 2–1 win at Newcastle United. His full senior debut came on 19 August 2017 in a 3–2 defeat at Southampton.

In April 2018, Rice was named as runner-up for the 2017–18 Hammer of the Year award behind Marko Arnautović. On 22 December, he made his 50th appearance for West Ham, the first player to do so while still a teenager since Michael Carrick. On 28 December, Rice signed a new contract until 2024 with the option of an additional year. On 12 January 2019, Rice scored his first goal for West Ham and was named man of the match in a 1–0 win against Arsenal, in West Ham’s 50th Premier League game at the London Stadium. On 20 April 2019 Rice was named on the shortlist for PFA Young Player of The Year award, which was eventually given to Rice’s England teammate Raheem Sterling on 28 April. At the end of the 2018–19 season, he was named the Players’ Player of the Year and won the award for Individual Performance of the Season, for his match winning game against Arsenal, and was named the Young Hammer of the Year for the third consecutive season.

On 17 July 2020, Rice scored his first and only Premier League goal of the season, an outside-the-box strike against Watford, in a 3–1 win. In the 2019–20 season, Rice played in all 38 league games for West Ham, playing every single minute. He was in the Premier League’s top five players for both tackles and interceptions leading West Ham players in both categories and making more passes than any other West Ham player. He was named Hammer of the Year.