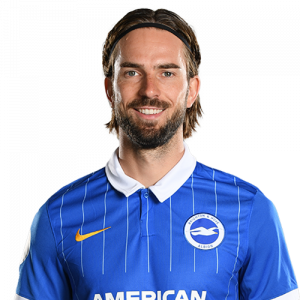 Pröpper signed for newly promoted Premier League club Brighton & Hove Albion on 7 August 2017 on a four-year contract, for a club-record transfer fee. 5 days later he made his debut, playing the full match in Brighton’s first ever Premier League fixture. Brighton went on to lose 2–0 at home to eventual league champions, Manchester City. He made his EFL Cup debut on 19 September coming on as a substitute in the 1–0 away loss at Bournemouth. Pröpper again played the whole match at home to West Brom on 9 September where Brighton won 3–1, recording their first Premier League win. Pröpper made 4 appearances in the 2017–18 FA Cup including the 2–0 quarter final defeat away to Manchester United. On 7 April 2018, Pröpper was shown a straight red card for a late challenge on Jonathan Hogg in a 1–1 home draw against Huddersfield Town. On 4 May, Brighton were to face Manchester United again, this time in the league where Brighton won 1–0 at Falmer Stadium securing Premier League status. Pröpper played the entire match.

Early in his second season at The Albion he featured in the consecutive victory over Manchester United, claiming a 3–2 home win on 19 August 2018. He played in what was Brighton’s only EFL Cup match of the season on 28 August coming on as a substitute in the 1–0 home loss to South Coast rivals, Southampton. Pröpper scored his first goal for Brighton in a 2–1 league defeat away against Leicester on 26 February 2019. Like the season prior, Pröpper made 4 appearances in the 2018–19 FA Cup where they went one step further, being knocked out in the Semi-final at Wembley Stadium against Manchester City in which Pröpper played in. Pröpper was again a regular in the squad for the Sussex club where their safety was secured on 4 May as a result of Cardiff City losing at home to Brighton’s rivals, Crystal Palace. This confirmation came exactly a year after Brighton secured their safety in the 2017–18 season.

On the opening day of the 2019–20 season, Pröpper set up Florin Andone’s goal in a match where Brighton recorded their joint biggest away victory in the Premier League, beating Watford 3–0.