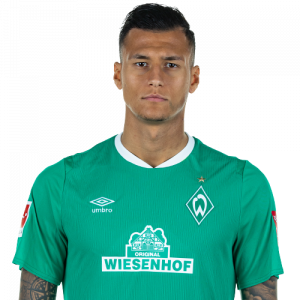 Davie Selke (born 20 January 1995) is a German professional footballer who plays as a striker for Werder Bremen, on loan from Hertha BSC.

Selke began his professional career with Werder Bremen in 2013 where he went on to score 10 goals in 36 appearances before signing for RB Leipzig in 2015 for a 2. Bundesliga record fee of €8 million. He spent two seasons with Leipzig, helping the club earn promotion to the Bundesliga for the first time in 2016 and qualification to the UEFA Champions League the following year. Having scored 14 goals in 51 appearances, Selke then joined Hertha BSC in June 2017.

He has also represented Germany at all youth levels and in 2014 was part of the squad which won the 2014 UEFA European Under-19 Championship, earning the Golden Boot and Golden Player awards for his performances at the tournament. Two years later, he featured at the 2016 Summer Olympics where Germany earned a silver medal, losing out to hosts Brazil in the final. The following year he helped his nation claim the UEFA European Under-21 Championship title.

Werder Bremen
Having spent the majority of his youth years at Hoffenheim, Selke signed for Werder Bremen in 2013 for €50,000. While spending most of the 2013–2014 season playing for the reserves in the fourth-tier Regionalliga Nord, he made his first-team debut for the club on 3 November 2013, coming on as a second-half substitute for Clemens Fritz in a 3–2 Bundesliga victory over Hannover 96. The following month, Selke exchanged blows with Fritz during a training session, with the pair having to be separated by teammates. He ended the season having scored 9 goals in 26 appearances for the reserves and remaining goalless in three first-team appearances for Die Grün-Weißen.