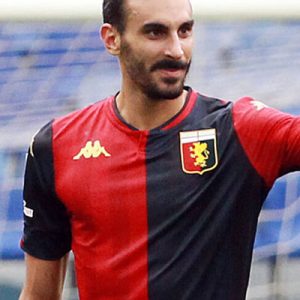 Davide Zappacosta (born 11 June 1992) is an Italian professional footballer who plays as a right-back for Serie A club Genoa, on loan from Chelsea, and the Italian national team.

On 31 August 2017, he was sold to Chelsea for a reported fee of €28 million plus bonuses. He signed a four-year deal at Stamford Bridge. The transfer was completed minutes before the transfer window shut on deadline day. Zappacosta made his debut for Chelsea on 9 September as a substitute replacing Victor Moses in the 74th minute of a 2–1 away win against Leicester City. He made his Champions League debut and scored his first goal for Chelsea on 12 September 2017, in a 6–0 home win against Qarabağ FK. With this goal, Zappacosta became the 100th Italian player to score a goal in the Champions League. His first Premier League goal came from outside the box in a 5–0 home win against Stoke City on 30 December 2017. At the end of the season he was an unused substitute as Chelsea beat Manchester United in the 2018 FA Cup Final.

On 29 May 2019, Zappacosta appeared in Chelsea’s 4–1 victory over Arsenal in the 2019 UEFA Europa League Final, coming on as a late substitute for Eden Hazard.

Roma (loan)
On 21 August 2019, Zappacosta signed a one-year extension to his contract at Chelsea and then joined Roma on an initial six-month loan deal with an option to extend the loan until the end of the 2019–20 season. On 4 October 2019, Zappacosta suffered an anterior cruciate ligament injury during training.

Genoa (loan)
On 19 September 2020, Zappacosta returned to Italy with Genoa on loan until the end of 2020–21 season. One day later on 20 September, he scored a goal on his league debut as Genoa beat Crotone 4–1 at home.