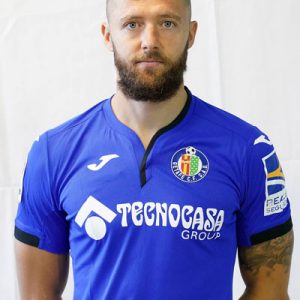 David Timor Copoví (born 17 October 1989) is a Spanish professional footballer who plays as a central midfielder for Getafe CF.

Born in Carcaixent, Valencian Community, Timor was a product of Valencia CF’s youth ranks. He made his senior debut with the reserves, playing two seasons in Segunda División B and suffering relegation in the second.

In summer 2010, Timor signed for CA Osasuna, but spent the vast majority of his first year with the-B team also in the third level. He made his debut with the main squad on 23 April 2011, playing the last ten minutes of a 0–2 La Liga away defeat against eventual champions FC Barcelona.

On 16 July 2013, Timor joined Segunda División club Girona FC in a season-long loan. On 25 July of the following year, he agreed to a three-year contract with Real Valladolid also in the second tier.

On 26 January 2016, Timor moved to fellow league team CD Leganés on a deal until 2018. He contributed with two goals in 17 appearances, as they achieved top tier promotion for the first time ever.

On 1 September 2017, Timor returned to Girona after signing a three-year contract. The following 31 August, he put pen to paper on a four-year deal with UD Las Palmas in the second division.

Timor joined Getafe CF on a three-year contract on 29 August 2019, after becoming a free agent.