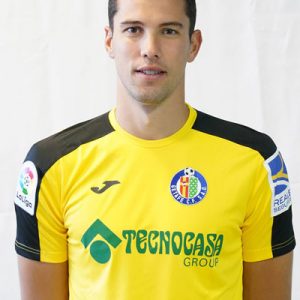 David Soria Solís (born 4 April 1993) is a Spanish professional footballer who plays for Getafe CF as a goalkeeper.

Early career
Born in Madrid, Soria finished his formation with Real Madrid. Following his release, he moved to England and trialled at Leicester City, who let him go after an injury on his first day; he was then discarded by Birmingham City after six weeks because of their salary cap, and ended his trial at Stoke City due to feeling discouraged.

Sevilla
Soria joined Sevilla FC in January 2013, and made his debut as a senior with the C-team in Tercera División. He was promoted to the reserves in 2013, and played 16 matches in his first season in Segunda División B, adding 34 in the following.

Getafe
On 13 July 2018, fellow top tier club Getafe CF reached an agreement with Sevilla for the transfer of Soria, who signed a four-year contract. He made his debut in the season opener, a 2–0 loss at Real Madrid on 20 August, and missed just one game as the team from the Community of Madrid finished a best-ever fifth, two points away from a Champions League debut.