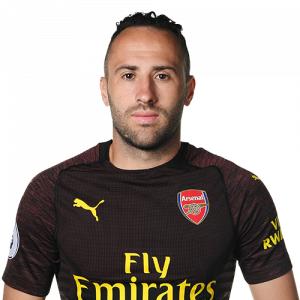 David Ospina Ramírez (born 31 August 1988) is a Colombian professional footballer who plays as a goalkeeper for Serie A club Napoli and the Colombia national team.

Ospina began his career at Atlético Nacional, making his debut with the club in 2005. After achieving two domestic titles with Los Verdolagas, Ospina joined French side Nice. In 2014, he joined Arsenal on a four-year deal.

Ospina has represented his country at a full international level since 2007. Upon his debut against Uruguay, he became the second-youngest goalkeeper to play for Colombia. He has since earned over 100 caps for his nation and has appeared at three Copa Américas and two World Cups.

On 4 July 2019, Napoli permanently signed Ospina from Arsenal. He was initially used in a rotational role with Alex Meret, although he became the team’s first choice goalkeeper under the club’s new manager Gennaro Gattuso, due to his superior ability with the ball at his feet. In the second leg of the Coppa Italia semi-finals against Inter Milan, Ospina committed an error on the opening goal, which allowed Inter’s Christian Eriksen to score directly from a corner; however, he later played a decisive role in Napoli’s progression to the 2020 Coppa Italia Final, producing several important saves, and also starting the play which led to Dries Mertens’s record–breaking equalising goal with a long kick, which allowed Napoli to earn a 1–1 home draw and a 2–1 aggregate victory. He was suspended for the final against Juventus on 17 June, however; Meret started in his place, with Napoli winning 4–2 on penalties following a goalless draw.