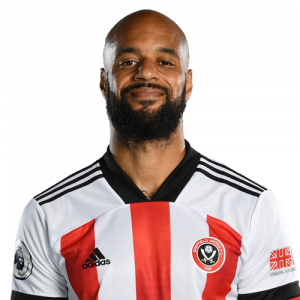 David James McGoldrick (born 29 November 1987) is a professional footballer who plays as a striker for Premier League club Sheffield United. He won 14 caps for the Republic of Ireland national team between 2014 and 2020, scoring one international goal.

A trainee at Notts County, he made his senior debut in 2004, before being signed by Southampton later in the year. He spent five years with the “Saints”, also playing on loan for Notts County in 2005, and both AFC Bournemouth and Port Vale in 2007. He transferred to Nottingham Forest in 2009 for a £1 million fee. He joined Sheffield Wednesday on loan in September 2011, and was loaned out to Coventry City in August 2012. After a successful spell at Coventry he joined Ipswich Town in July 2013 following an initial loan period, and stayed with the club for a further five seasons before being released after his contract expired in the summer of 2018. He signed with Sheffield United in July 2018 and was named as the club’s Player of the Year as they secured promotion into the Premier League in the 2018–19 season.

On 24 July 2018, McGoldrick signed a one-year contract with Championship side Sheffield United after impressing manager Chris Wilder during a one-week trial period. On 29 September, he scored twice in a 3–2 win at Millwall and was named on the EFL team of the week. On 22 April, he scored a brace in a 3–0 victory over Hull City at Bramall Lane and was again named in the EFL team of the week. He featured only in league matches during the 2018–19 campaign, and was named as the club’s Player of the Year as his 15 goals in 44 appearances helped to secure promotion out of the Championship.

McGoldrick suffered a long domestic goal drought in the 2019–20 season, which he ended by opening the scoring in a 2–1 win at Reading in the fifth round of the FA Cup on 3 March. In the league though, it was reported that Opta Sports statistics showed no Premier League player had ever managed 36 shots on target or had an expected goals rating of 6.2 without finding the net; in a positive light, “Didzy”, as Sheffield United supporters called him, had made 36 tackles per game, more than any other regular Premier League forward that season. During his run he missed an open goal against Brighton & Hove Albion and had a goal Tottenham Hotspur at White Hart Lane ruled out for offside by the video assistant referee. On 11 July, he scored his first Premier League goals with a brace in a 3–0 home win over Chelsea.

On 17 December 2020, McGoldrick scored two goals in a 3–2 home defeat to Manchester United that left Sheffield United bottom of the Premier League with just one point and said that the team had to stay positive despite their poor start to the season.