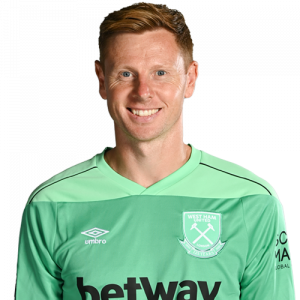 David Edward Martin (born 22 January 1986) is an English professional footballer who plays as a goalkeeper for Premier League club West Ham United. He has played for the England under-17, England under-19 and England under-20 teams.

Born in Romford in the London Borough of Havering, Martin started his career as a youth-team player with Tottenham Hotspur where he originally played as defender.

On 3 June 2019, Martin signed a two-year contract with Premier League side West Ham United, to provide cover for first choice keepers Łukasz Fabiański and Roberto. Martin made his West Ham and Premier League debut on 30 November 2019 after Fabiański picked up an injury and Roberto was dropped due to poor form, keeping a clean sheet in a 1–0 away win against Chelsea.