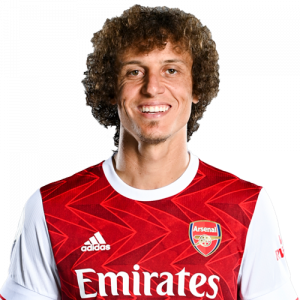 David Luiz Moreira Marinho (born 22 April 1987) is a Portuguese professional footballer who plays for Premier League club Arsenal and the Brazil national team. Primarily a centre back, he can also be deployed as a defensive midfielder.

After starting out at Vitória, he moved to Benfica, remaining with the club for five seasons (three complete). He joined Chelsea in January 2011, winning the UEFA Champions League during the 2011–12 season. In the following season he won the UEFA Europa League. In June 2014, he transferred to Paris Saint-Germain for a fee of £50 million, a world record transfer for a defender, and won all four domestic competitions over his two seasons in French football. He returned to Chelsea in August 2016 in a £30 million transfer deal. He transferred to Arsenal in 2019.

David Luiz made his full international debut for Brazil in 2010 and has since earned over 50 caps for his country. He was a member of the Brazilian teams which won the 2013 FIFA Confederations Cup and reached the semi-finals of the 2014 FIFA World Cup, and has also represented his nation in two editions of the Copa América.