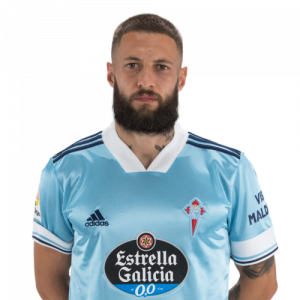 David Juncà Reñe (born 16 November 1993) is a Spanish professional footballer who plays for RC Celta de Vigo as a left back.

Girona
Born in Riumors, Girona, Catalonia, Juncà was a product of Girona FC’s youth system. He made his official debut with the first team on 17 December 2011, playing one minute in a 3–2 home win against Gimnàstic de Tarragona for the Segunda División.

During the following two seasons, Juncá played for both the reserves and farm team CF Riudellots. Returned for 2014–15, he scored his first goal as a professional on 14 September 2014, helping to a 1–1 away draw with Sporting de Gijón.

Eibar
Juncà signed a three-year deal with La Liga club SD Eibar on 28 July 2015, after being terminated at the Estadi Montilivi. He made his debut in the competition on 24 August, coming on as a second-half substitute for Saúl Berjón in a 3–1 away victory over Granada CF.

Celta
On 4 June 2018, free agent Juncà agreed to a five-year contract at fellow league side RC Celta de Vigo. He contributed 21 matches in his debut campaign for the last team above the relegation zone, but subsequently spent nearly two years on the sidelines due to several injury problems.