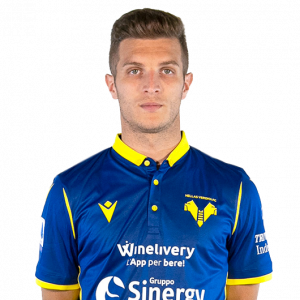 Darko Lazović (born 15 September 1990) is a Serbian professional footballer who plays as a winger for Serie A club Hellas Verona and for Serbia national football team.

At the age of 21, he was recognized as the best young player of the Serbian Superliga in 2011.

Borac Čačak
From the age of six, Lazović began to train in the youth academy of FK Borac Čačak. By the time he played for the junior team, he was attracting the attention of scouts from outside of Čačak.

Red Star Belgrade
On 22 June 2009, at the age of 18, Lazović completed a transfer from Borac to Red Star, whose coach at the time was Vladimir Petrović. He signed a four year contract with Red Star. He missed the start of the season due to injury, but made his debut on 12 September 2009 against Metalac Gornji Milanovac.

Genoa
In summer 2015, Lazović signed with Serie A team Genoa. In a friendly match against Hertha BSC on 1 August 2015, Lazović scored his first goal for Genoa in their 0–2 away win. On 8 November 2015, Lazović produced two assists in a 2–2 tie with Frosinone Calcio, and was subsequently named in the Serie A “Team of the Week”. On 16 December 2016, Lazović scored his first goal for Genoa against Fiorentina, in a match that was only 62 minutes long as it was meant as a continuation of an unfinished match from September 11 which had been abandoned due to an unusual hailstorm. His contract expired and he left the club on 30 June 2019.