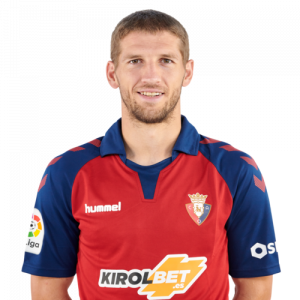 Darko Brašanac (born 12 February 1992) is a Serbian professional footballer who plays for Spanish club Osasuna as a central midfielder.

Brašanac represented his country at all youth international levels, collecting more than 35 appearances, before making his senior team debut in 2015.

Partizan
After starting out at his local club Zlatibor Čajetina at the age of 6, Brašanac moved to Partizan still as a trainee in 2005. He was one of the most promising members of the team led by Slađan Šćepović that won numerous international youth tournaments. Consequently, Brašanac was promoted to the senior squad in January 2010. He made his competitive debut for Partizan in a 2–0 away league win over Hajduk Kula on 14 March 2010, coming on as an 80th-minute substitute for Cléo. Until the end of the 2009–10 season, Brašanac recorded two more league appearances, as the club won its third consecutive championship title.

Betis
In August 2016, Brašanac was transferred to Spanish club Betis on a five-year deal.[ He made his official debut for the Andalusian side on 11 September 2016, playing the full 90 minutes and receiving a yellow card in a 3–2 away win against Valencia. On 23 April 2017, Brašanac scored his first goal in La Liga, giving his team a 1–0 win away at Celta.

Loans to Leganés and Alavés
On 30 August 2017, Brašanac was loaned to fellow top tier club CD Leganés for one year. Roughly one year later, he joined Deportivo Alavés in the same category, also in a temporary deal.

Osasuna
On 22 July 2019, Brašanac agreed to a three-year contract with newly promoted side CA Osasuna, for a fee of € 1 million and an additional €750,000 in add-ons, with Betis retaining 10% of a future sale; his release clause was set at €8 million.