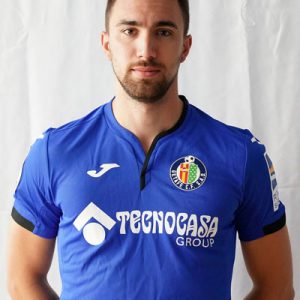 Darío Poveda Romera (born 13 March 1997) is a Spanish footballer who plays as a forward for Getafe CF on loan from Atlético Madrid.

Born in San Vicente del Raspeig, Alicante, Valencian Community, Poveda joined Villarreal CF’s youth setup in 2008, aged 11. He made his senior debut with the C-team on 13 March 2016, coming on as a late substitute and scoring the last in a 5–2 home routing of UD Benigànim for the Tercera División championship.

On 21 August 2016, Poveda made his debut with the reserves in a 0–1 Segunda División B away loss against UE Cornellà. He was definitely promoted to the B-side the following 30 May, after scoring 14 goals for the C-team.

On 21 August 2017, Poveda made his first team – and La Liga – debut, replacing Manu Trigueros in a 0–1 loss at Levante UD. The following 23 July, he moved to another reserve team, Atlético Madrid B also in the third division.

Poveda made his first team debut for Atleti on 23 November 2019, playing the last eight minutes in a 1–1 away draw against Granada CF. On 31 August of the following year, he moved to fellow top tier side Getafe CF on a season-long loan deal.