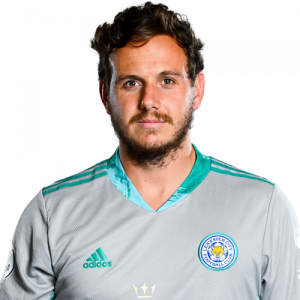 Daniel Ward (born 22 June 1993) is a Welsh professional footballer who plays as a goalkeeper for Premier League club Leicester City and the Wales national team. Ward has also previously played for Liverpool and Wrexham as well as having loan spells at Tamworth, Morecambe, Aberdeen and Huddersfield Town. He was first called up to the Welsh national team in 2013 and made his debut in 2016. He was part of their squad that reached the semi-finals of UEFA Euro 2016.

Wrexham
Ward was born in Wrexham. He is a product of the Wrexham Academy, signing for them as a 14-year-old in 2007. In the 2010–11 season, Ward was briefly loaned out to Conference Premier rivals Tamworth, making just one appearance in a league match on 12 March 2011 in a 3–2 loss against Hayes & Yeading United. He returned to Wrexham for the 2011–12 season and was promoted to the first team squad but only made it as far as the bench on a handful of occasions.

Ward with Brad Jones and Péter Gulácsi in 2012.
Liverpool
On 30 January 2012, it was announced that Liverpool had signed Ward for a fee of around £100,000. He was quickly promoted to the Reserve team and featured in the 2011–12 NextGen Series where he played in the semi-finals.

Ward got his first call-up to the Liverpool senior squad in a League Cup game against Swansea City on 31 October 2012 as an unused substitute. His next senior call up wasn’t until 12 January 2014 for a Premier League game against Stoke City where Ward was deputising for the injured Brad Jones.

In March 2015, he was loaned to League Two side, Morecambe for one month. On 21 March 2015, he made his football league debut in an away game against Carlisle United.

On 23 June 2015, Ward signed a new five-year contract at Liverpool, keeping him at the club until 2020. A few days later, he was loaned to Scottish Premiership club Aberdeen. He made his debut for Aberdeen on 2 July 2015, against FK Shkëndija in the first qualifying round of the UEFA Europa League. After the game, Aberdeen informed UEFA officials that Ward had been targeted by laser beams.

Ward after the 2018 UEFA Champions League Final.
On 10 January 2016, Liverpool cut short Ward’s loan at Aberdeen and he returned after impressing with 13 clean sheets in all competitions for the Dons, making him a firm fan favourite. On 17 April 2016, Ward made his debut for Liverpool against Bournemouth in place of Simon Mignolet, where Liverpool won 2–1. The Welshman was called into action on several occasions in the second half, denying King twice before making a great late save from Grabban’s close-range header.

On 11 July 2016, he signed a season-long loan with Football League Championship side Huddersfield Town. He made his competitive debut for the Terriers in their 2–1 win over Brentford on 6 August 2016. Ward played in the play-offs for promotion, saving a total of three penalties, including two in the final against Reading, to help Huddersfield to promotion.

Leicester City
On 20 July 2018, as the arrival of Alisson relegated him to fourth choice at Liverpool, Ward completed a move to fellow Premier League team Leicester City for around £12.5 million. He made his debut on 28 August in the second round of the EFL Cup, keeping a clean sheet in a 4–0 win over Fleetwood Town. A month later in the next round, he saved three penalties in a shootout win at Wolverhampton Wanderers after keeping a clean sheet in a goalless draw, and was praised by teammate Marc Albrighton.

International career
Ward has represented Wales at under-17, under-19 and under-21 level. He was capped three times for the under-19s and featured four times for the under-21s. He was called up to the senior team for the first time for a friendly match against Finland, and was an unused substitute in the 1–1 draw on 16 November 2013 at the Cardiff City Stadium.

He made his senior debut as a half-time substitute for Wayne Hennessey in an international friendly against Northern Ireland on 24 March 2016, conceding from Craig Cathcart in a 1–1 draw at the same ground. Ward was selected in Wales’ 23-man squad for UEFA Euro 2016 and was handed his first start for his country in his third cap in their opening game of the tournament, a 2–1 victory over Slovakia, after Hennessey suffered a back spasm prior to the match.

Ward missed Wales’ participation in the 2018 China Cup when his passport got lost in the post during his visa application, and Michael Crowe was called up in his place.