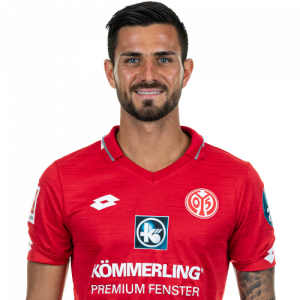 Danny Latza (born 7 December 1989) is a German footballer who currently plays as a midfielder for Mainz 05.

Latza began his footballing career in 1995, at the age of five, as a youth player with his local team, DJK Arminia Ückendorf. He stayed as a player for three years before moving to Schalke 04 where he started his professional career. Latza’s first professional appearance was in the Bundesliga on 14 February 2009 against VfL Bochum, when he came on as a substitute for Levan Kobiashvili.

Latza joined the SV Darmstadt 98 for the 2011–12 3. Liga season. On 22 May 2013, it was announced that the MSV Duisburg had signed Latza. However this contract was valid only for the 2. Bundesliga and was voided when the Deutsche Fußball Liga denied Duisburg the license to play in the 2013–14 2. Bundesliga season. After a brief trial spell, Latza signed with the 2. Bundesliga side Bochum.

On 17 March 2021, Latza agreed to rejoin Schalke 04 on a free transfer for the 2021–22 season, signing a two-year contract which will be extended by an extra year should Schalke achieve promotion in that time.