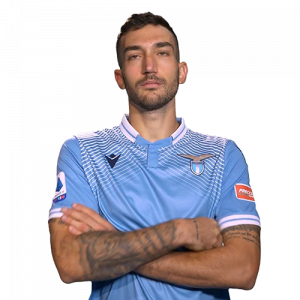 Danilo Cataldi (born 6 August 1994) is an Italian professional footballer who plays as a midfielder for Serie A club Lazio.

Club career
Cataldi was born in Rome to parents from Missanello, Southern Italy. A product of Lazio’s youth system, he was sent on loan to Serie B club Crotone in the 2013–2014 season, where he played as a starter, obtaining 35 appearances and scoring 4 goals.

On 19 July 2017, Cataldi was loaned out to newly promoted Serie A club Benevento.

International career
On 5 March 2014, Cataldi made his debut with the Italy U-21 side in a qualification match against Northern Ireland.

With the Italy U-21 he took part at the 2015 UEFA European Under-21 Championship.

On 5 November 2016, Cataldi was called up to the senior Italian international squad for the first time for 2018 FIFA World Cup Qualification match against Liechtenstein and friendly against Germany.

In June 2017, he was included in the Italy under-21 squad for the 2017 UEFA European Under-21 Championship by manager Luigi Di Biagio. He made his only appearance of the tournament In Italy’s second group match on 21 June, a 3–1 defeat to Czech Republic.[7] Italy were eliminated in the semi-finals following a 3–1 defeat to Spain on 27 June.