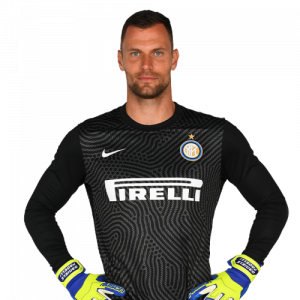 Daniele Padelli (born 25 October 1985) is an Italian professional footballer who plays as a goalkeeper for Serie A club Inter Milan.

Inter Milan
Padelli was signed by Inter Milan in mid-2017. It was reported that Padelli already agreed to a deal in May in order to formally join the club as a free agent on 1 July. Padelli and his goalkeeping team mate Tommaso Berni signed a new 1-year contract on 28 June 2019.

On 2 February 2020, Padelli made his first Serie A appearance for Inter in an away match against Udinese, keeping a clean-sheet in a 2–0 win at Dacia Arena. Padelli became the first choice goalkeeper due to the injury of Samir Handanović.