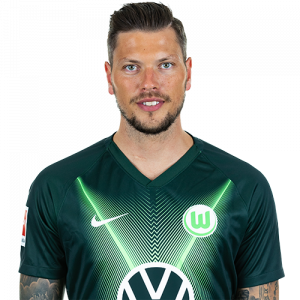 Daniel Ginczek (born 13 April 1991) is a German footballer who plays as a striker for VfL Wolfsburg in the Bundesliga. His paternal grandparents are from Poland.

Borussia Dortmund
In the 2007–08 season, he was the best scorer in the U-17 league. In 25 games he scored 26 goals. In the U-18 national team, Ginczek scored three goals in six games, he also took part in seven matches of the U-19 national team, scoring on one occasion.

Since the 2008–09 season he was playing for the reserves of Borussia Dortmund. He made his debut in professional football on 28 July 2009 at a 0–0 draw against the reserve team of Eintracht Braunschweig.

In 2010, Ginczek was promoted to the Borussia Dortmund first team.

Nürnberg
3 June 2013 saw the announcement of Ginczek having agreed to join Bundesliga side ürnberg for an undisclosed fee, signing a three-year contract.

Stuttgart
For the 2014–15 season he moved to Stuttgart. In May 2016 Ginczek extended his contract with Stuttgart until June 2020.