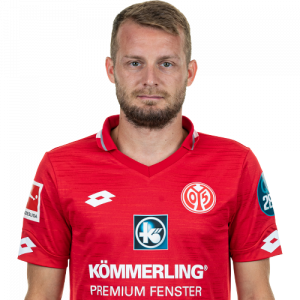 Daniel Brosinski (born 17 July 1988) is a German professional footballer who plays as a right-back for 1. FSV Mainz 05.

Brosinski was born in Karlsruhe. He played his first Bundesliga match for 1. FC Köln (which was his first fully professional match) on 21 February 2009 in a 2–1 away win against Bayern Munich. He scored 1. FC Köln’s second goal.

Although he had signed for Greuther Fürth a two-year contract until 2015, after Fürth’s failed to gain promotion in 2014, Brosinski stated his desire to play in the Bundesliga. On 3 July 2014, Fürth complied with his wishes and allowed him to join 1. FSV Mainz 05 for transfer believed to be about €1 million. He signed a four-year contract expiring June 2018. At Mainz he was planned to be the successor of Zdeněk Pospěch who left the club at the age of 35 and went back home to the Czech Republic.