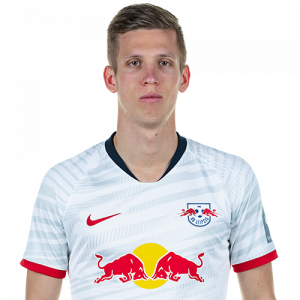 Daniel “Dani” Olmo Carvajal (born 7 May 1998) is a Spanish professional footballer who plays for Bundesliga club RB Leipzig and the Spain national team. He can play as either an attacking midfielder or a winger.

He made his debut on 1 February 2020, in a 2–2 draw with Borussia Mönchengladbach coming on for Tyler Adams in 69th minute. Three days later he scored the only goal in a 3–1 DFB-Pokal defeat to Eintracht Frankfurt, having come on for Amadou Haidara in 46th minute. He earned his first start for the club on 9 February, in a game against Bayern Munich that ended as a goalless draw, coming off for Patrik Schick in 69th minute. On 12 June, he scored both goals in a 2–0 victory over 1899 Hoffenheim. On 13 August, he scored the opening goal in a 2–1 victory over Atlético Madrid at Estádio José Alvalade, as Leipzig progressed to the Champions League semi-final for the first time in the history of the club.