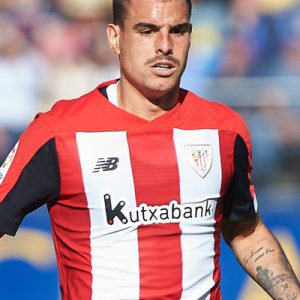 Daniel ‘Dani’ García Carrillo (born 24 May 1990) is a Spanish footballer who plays for Athletic Bilbao as a midfielder.

He spent the vast majority of his professional career with Eibar since signing in 2012 (initially on loan), representing the club in all three major levels of Spanish football and playing 224 competitive matches. In 2018, he signed with Athletic Bilbao.

Early career
Born in Zumarraga, Gipuzkoa, Basque Country, García started his career in the cantera of Real Sociedad, and made his senior debut with Alicante CF B in 2009–10. He was promoted to the latter’s first team later that year, but suffered relegation from Segunda División B in his second season.

Eibar
García signed with Real Sociedad in July 2012, being immediately loaned back to the third tier to play for SD Eibar. He finished his debut campaign with 41 league appearances to his credit, helping the side promote in the playoffs.

In July 2013, García’s loan to Eibar was renewed, and he made his Segunda División debut on 18 August, starting in a 2–1 away win against Real Jaén. On 26 June 2014, he signed permanently with the Armeros, promoted to La Liga for the first time ever.

Athletic Bilbao
On 3 June 2018, Athletic Bilbao announced that García had signed a four-year contract after the transfer was agreed in March.