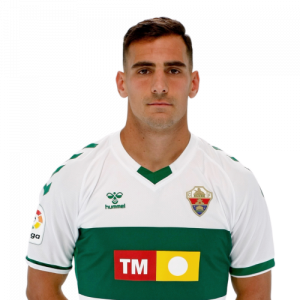 Daniel ‘Dani’ Pedro Calvo San Román (born 1 April 1994) is a Spanish professional footballer who plays for Elche CF as a centre back.

Numancia
Born in Huesca, Aragon, Calvo began his career with CD Peñas Oscenses. He signed with CD Numancia in 2012, being initially assigned to the youth setup and being promoted to the B-team in 2013.

On 8 June 2014, Calvo played his first match as a professional, starting in a 1–1 home draw against SD Eibar for the Segunda División. On 31 August of the following year he joined another reserve team, Atlético Levante UD on loan for one year.

Calvo featured regularly for the Rojillos after his return, scoring his first professional goal on 4 February 2017 by netting his side’s first in a 3–2 away win over AD Alcorcón. Late in that month, he extended his contract until 2020.

Elche
On 24 December 2018, relegated to the bench after the arrival of Derik Osede, Calvo was loaned to fellow second division club Elche CF until June. The following May, after avoiding relegation, he agreed to a permanent deal.