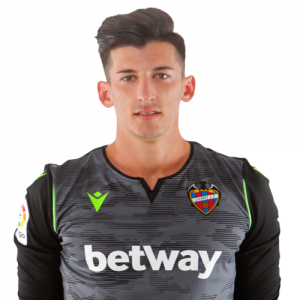 Daniel “Dani” Cárdenas Lindez (born 28 March 1997) is a Spanish footballer who plays for Atlético Levante UD as a goalkeeper.

Born in Terrassa, Barcelona, Catalonia, Cárdenas joined Levante UD’s youth setup in January 2014, after notably representing FC Barcelona and RCD Espanyol. He was promoted to the former’s reserves for the 2016–17 season, and made his senior debut on 20 August 2016 by starting in a 1–0 home loss against CD Atlético Baleares.

Initially a third-choice behind Dani Sotres and Koke Vegas, Sotres became a regular starter after Sotres left and Koke was promoted to the main squad. On 12 March 2020, he renewed his contract until 2022.

On 27 November 2020, as Aitor was injured, Cárdenas made his first team – and La Liga – debut, playing the full 90 minutes in a 1–1 away draw against Real Valladolid.