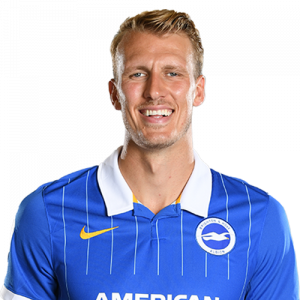 Daniel Johnson Burn (born 9 May 1992) is an English professional footballer who plays as a defender for Premier League club Brighton & Hove Albion.

Burn made his debut in the Football League for Darlington in 2009 and joined Fulham at the end of the 2010–11 season, having made 19 appearances for Darlington. He spent the 2012–13 season on loan to Yeovil Town, for whom he made 41 appearances, and spent part of the following season on loan to Birmingham City. He joined Wigan when his contract with Fulham expired at the end of the 2015–16 season. Burn signed for Brighton & Hove Albion ahead of the 2018–19 season, and was loaned back to Wigan until January 2019.

Burn signed a four-year contract with Premier League club Brighton & Hove Albion on 9 August 2018 for an undisclosed fee. He was loaned back to Wigan Athletic until January 2019.

Burn returned to Brighton after his loan spell, and made his debut on 26 January in the FA Cup third-round tie against West Bromwich Albion; the match finished goalless, and Burn was named man of the match. He made two more starts, both in the FA Cup, and finally made his league debut for the club on the opening day of the 2019–20 season away to Watford, playing in a back three alongside Lewis Dunk and Shane Duffy; according to the Telegraph’s report, he excelled as Albion won 3–0. He continued as a fixture in the starting eleven, and by the end of the year was the only Brighton player to play every minute of their Premier League campaign. On 1 January 2020, he fractured his collarbone in collision with Chelsea’s Reece James. The injury required surgery, and he was able to return to action on 8 February.

On 2 January 2021, Burn scored an own goal, gave away a penalty and picked up a yellow card in a match where Brighton came from 3–1 behind to claim a vital point in an eventual 3–3 home draw against Wolves. Burn played in Brighton’s 1–0 away victory over defending champions Liverpool on 3 February claiming their first league win at Anfield since 1982.