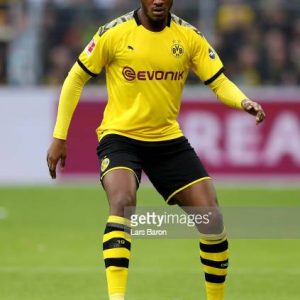 Dan-Axel Zagadou (born 3 June 1999) is a French professional footballer who plays as a centre-back or left-back for Borussia Dortmund.

Early career
Zagadou began his career playing at junior level for hometown club US Créteil, before signing for Paris Saint-Germain at the age of 12 in 2011. He then spent the next five seasons developing in PSG’s academy, before being assigned to the reserve squad in 2016, where he made 9 appearances in the CFA.

Borussia Dortmund
On 5 June 2017, German club Borussia Dortmund announced the signing of Zagadou on a free transfer and a five-year contract. On 28 October 2017, he scored his first goal for Dortmund in a 4–2 away loss against Hannover 96, where he also received his first red card in the 59th minute.

International career
Zagadou has represented France at U16, U17, U18, U19 and he currently plays for the U20 side.