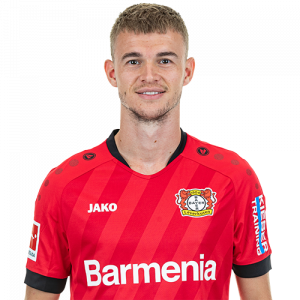 Daley Sinkgraven (born 4 July 1995) is a Dutch footballer who plays as a left-back for Bayer Leverkusen in the Bundesliga.

Heerenveen
Sinkgraven started playing football with MVV Alcides from his hometown Meppel. He ended up in the youth academy of SC Heerenveen. Sinkgraven had a breakthrough season in 2013–14 playing 17 games while starting five of them. He made his debut in the 2–2 draw against Roda JC Kerkrade on 18 January 2014 by replacing Hakim Ziyech. On 28 March 2014, he extended his contract until the summer of 2017. On 22 November 2014, he scored an own goal in a 4–1 away loss to Ajax. Sinkgraven’s great performances for Heerenveen caught the eye of many giant English clubs. Chelsea, Liverpool and Manchester United were all very interested in buying the teenage Sinkgraven.

Ajax
On 30 January 2015, after excellent performances for SC Heerenveen, it was announced that Sinkgraven had joined Ajax for a fee of €7 million at the tender age of 19 years old, making him the club’s most expensive acquisition since Miralem Sulejmani, who had also made the transfer to Ajax from Heerenveen. He signed a five and a half year-contract with the club and was given the number 8 shirt previously worn by Lerin Duarte, who was sent on a six-month loan spell to Heerenveen in return. He made his debut for the first team of Ajax in the starting lineup on 5 February 2015 in a 1–0 home loss to AZ.

Sinkgraven helped guide Ajax to the final of the 2016–17 Europa League where they lost to Manchester United. Sinkgraven was also a part of the Ajax team that won the Dutch Eredivisie title and the Dutch KNVB Cup during the 2018–19 season. In that same season, Sinkgraven also helped Ajax reach the semi-finals of the Champions League where they lost to Tottenham, after knocking out Real Madrid and Juventus in the previous rounds. Sinkgraven was hampered by injuries for a lot of the time, while at Ajax. In his four and a half years at Ajax, he missed 101 games through injury and he was out injured for a total of 738 days.