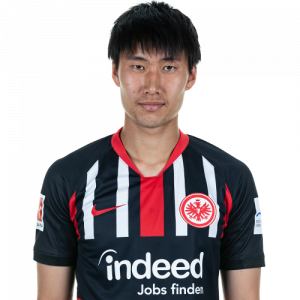 Daichi Kamada (born 5 August 1996) is a Japanese professional footballer who plays as a midfielder for Bundesliga club Eintracht Frankfurt and the Japan national team.

Kamada made his Eintracht Frankfurt debut in the first round of the DFB–Pokal, starting a match and played 73 minutes before being substituted, in a 3–0 win against TuS Erndtebrück. In a follow–up match against SC Freiburg, he made his league debut for the club, starting a match and played 67 minutes before being substituted, in a 0–0 draw. However, Kamada found his first team opportunities at Eintracht Frankfurt, due to competitions and his own injury concern. Manager Niko Kovač said about his progress, saying: “Another reason for Daichi was that he is extraordinarily good in terms of ball technique and that he is very good in the gaps, which the opponent cannot really control moves. Unfortunately he got off a little bit badly because he was pushed away from time to time. You have to give him the time, he’ll get that too.” At the end of the 2017–18 season, he made four appearances in all competitions.

Kamada chasing the ball during the second leg of UEFA Europa League’s round of 32 match against Red Bull Salzburg.

Since the start of the 2019–20 season, Kamada returned from a loan spell at Sint-Truiden and quickly became a first team regular for Eintracht Frankfurt, playing as a second striker. He then scored his first goal of the season, in a 5–3 win against Waldhof Mannheim in the first round of the DFB–Pokal. Kamada played in both legs of the UEFA Europa League Play–Off Round against RC Strasbourg, as he helped the side win 3–1 on aggregate to send them through to the Group Stage. Manager Adi Hütter praised his performance, stating that Kamada has matured and presented himself differently.

He then set up two goals in two matches between 24 October 2019 and 27 October 2019 against Standard Liège and Borussia Mönchengladbach. Kamada then scored a brace, in a 2–1 win against Arsenal in the UEFA Europa League match on 28 November 2019. After the match, Manager Hütter, once again, praised his performance. His fourth goal of the season then came on 12 December 2019, in a 3–2 win against Vitória. However, at the beginning of 2020, Kamada suffered a torn ligament that kept him out throughout January. It wasn’t until on 1 February 2020 that he returned to the starting line–up and played 45 minutes before being substituted, in a 1–1 draw against Fortuna Düsseldorf. Following this, Kamada appeared in the next matches as an unused substitute before returning to the starting line–up against Red Bull Salzburg in the second leg of UEFA Europa League’s Round of 32 match and scored a hat–trick, in a 4–1 win. The club went on to progress to the next round of the UEFA Europa League following a 2–2 draw in the second leg. A week later on 4 March 2020, he scored his eighth goal of the season, in a 2–0 win against Werder Bremen in the quarter–finals of the DFB–Pokal.

Two months later on 26 May 2020, Kamada scored his ninth goal of the season, as well as, setting up the club’s first goal of the game, in a 3–3 draw against SC Freiburg. This was followed up by scoring in a 2–1 win against VfL Wolfsburg. He later contributed for Eintracht Frankfurt, setting up two goals in two matches between 13 June 2020 and 17 June 2020, winning both matches against Hertha BSC and Schalke 04. Despite the season was suspended because of the COVID-19 pandemic, Kamada went on to make forty–seven appearances and scoring sixteen times in all competitions, making him the club’s top scorer at the end of the 2019–20 season. Following this, the club began talks with Kamada over a new contract.