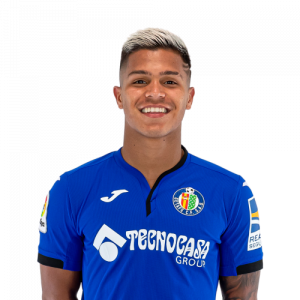 Juan Camilo “Cucho” Hernández Suárez (born 22 April 1999) is a Colombian footballer who plays for Spanish club Getafe on loan from Watford. Mainly a striker, he can also play as a winger.

Early career
Hernández joined Deportivo Pereira in 2015 at the age of only 15, after impressing with an amateur side. He made his first team debut on 6 April 2015 at the age of just 15, starting in a 2–1 home win against Deportes Quindío for the Categoría Primera B championship.

Hernández scored his first senior goal on 5 September 2015, netting his team’s first in a 3–2 away win against Real Santander. After finishing his first season with three goals, he netted 20 times during his second, being the tournament’s top goalscorer; highlights included a hat-trick in a 3–0 home success over Tigres F.C. on 3 July 2016.

Granada and loan to América de Cali
On 22 December 2016 Hernández joined América de Cali on loan from Granada CF, after signing for the latter side in September. He made his Categoría Primera A debut on 23 February 2017, coming on as a second-half substitute in a 0–2 home loss against Jaguares de Córdoba.

Hernández scored his first goal in the main category of Colombian football on 3 June 2017, netting the game’s only in an away win over Deportivo Pasto.

Watford
After Granada was sold to Jiang Lizhang, former owner Gino Pozzo assigned his federative rights to Watford ahead of the 2017–18 season.

Huesca (loan)
On 8 July 2017, Hernández moved to Segunda División side SD Huesca on loan for one year. He scored 16 goals during the 2017–18 campaign, as his side achieved promotion to La Liga for the first time ever. On 4 June 2018, his loan was extended for a further season, and he made his top tier debut on 19 August by starting in a 2–1 away win against SD Eibar.

Hernández scored his first goal in the main category of Spanish football on 2 September 2018, netting the opener in a 2–8 loss at FC Barcelona. He finished 2018–19 with four goals in 34 appearances, as his side was immediately relegated back.

Getafe (loan)
On 14 August 2020, Hernández remained in Spain and its first division, after joining Getafe CF on a season-long loan.