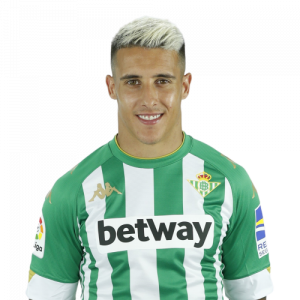 Cristian Tello Herrera (born 11 August 1991) is a Spanish professional footballer who plays as a forward or winger for Real Betis.

He spent his youth at Espanyol and Barcelona, playing for both clubs’ reserves before breaking through into the first team of the latter. He also spent one and a half seasons in Portugal with Porto and as many in Italy with Fiorentina, returning to Spain with Betis in 2017.

Tello represented Spain at the 2012 Olympics, and was part of the under-21 squad which won the European Championship in 2013. He won his first full cap in 2013.

Espanyol
Born in Sabadell, Barcelona, Catalonia, Tello started playing at the age of eight with CFU Can Rull, moving to FC Barcelona shortly after and being loaned to another club in the region, CF Damm, for one year.

Barcelona
In June 2010, Tello moved back to FC Barcelona B, who competed in the second level. On 9 November 2011 he made his debut for Barça’s main squad, playing the full 90 minutes in a 1–0 away win against CE L’Hospitalet in that season’s Copa del Rey; he scored a brace in the second leg, a 9–0 demolition.